Home > eteaket Blog > What exactly is Pu’erh Tea & how do you brew it?

What exactly is Pu’erh Tea & how do you brew it?

Pu’erh tea is a style of post-fermented and precisely aged tea from Yunnan province in southwestern China. It can be traced back to the Tang dynasty (618-907), during which time the Chinese used to transport the tea by horse from the gardens to the town of Pu’Erh in Yunnan province . As these horse caravans travelled through tropical rainforests on the journey along the Ancient Tea Horse Road, apparently the moisture in the air caused the tea to ferment. The resulting flavour was so popular that they decided to introduce a fermenting process for Pu’Erh.

Since 2003 when Pu’erh was designated a protected origin, only teas from Yunnan can be called Pu’erh.

It’s a highly sought after tea with a complex, earthy, aromatic and bitter-sweet taste. Fortunes have been made and lost on Pu’Erh. In fact in 1997, a Malaysian businessman is reported to have paid USD38,400 for 100g of 60 year old Pu’Erh tea in Guangzhou. That made it more expensive than gold at the time! 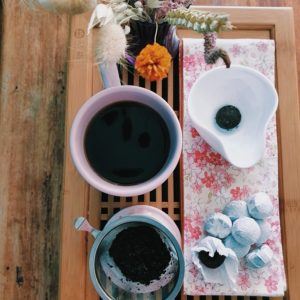 What is Sheng and Shou?

There are broadly two main types of Pu’erh, firstly raw (sheng) pu’erh, which can be aged naturally over time (in the right conditions) as it slowly oxidises. The second type is cooked (shou) pu’erh, which is intentionally fermented through a process called wet piling (wo dui) to fast forward the ageing process. 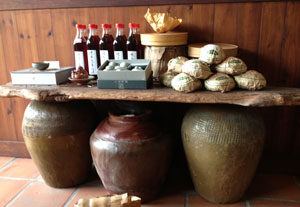 How is pu’erh tea made?

The making of pu’erh, like all artisan tea, is an art rather than a science. There’s no step-by-step handbook as much depends on the skill and experience of the tea master to know the right time to harvest depending on many factors like the weather and the land conditions.

The first step is to handpick the buds and the leaves before spreading them out on bamboo mats to wither for at least 5 hours to reduce the water content. The leaves are then fired in a wok to deactivate most of the enzymes in the leaf responsible for oxidation. This stage is often referred to as ‘kill green’ or sha qing’. As a general rule, the fewer enzymes that are deactivated, the more the tea will develop and darken as it matures.

Once the leaves have been fried (the tea is known as maocha or rough tea at this stage), they’re delicately rolled for up to 10 minutes to bruise and break the surface of the leaves and stems. This releases any remaining water and the tannins, which is responsible for the unmistakable bitter-sweet flavour. The next step is to rest the leaves before a final slow drying in the sun.

The resulting tea is raw (sheng) pu’erh tea, which can be drunk right away but is more often than not cellared in warm, humid conditions to age. The leaves are often made into different shapes to aid the ageing process. They might be compressed into traditional round cakes (beeng cha), formed into bricks (zhuan cha), made into little nests (tuo cha) or even custom shapes like mushrooms or even Buddhas. How fast the sheng pu’erh matures depends on the nature of the moacha, how compressed the leaves are and how optimum the storage conditions are. Some say that the tea should mature for 30 years in order to truly shine!

Sheng pu’erh tea is ideally aged in conditions of around 20-30 degrees centigrade with a 60-70% humidity level. The tea should be kept in a dark room with air circulation and away from strong flavours.

To make cooked (shou) pu’erh tea, the raw pu’erh tea will be rapidly fermented over 45-60 days to speed up the aging process. This Wo Dui process is rather like cheesemaking. Piles of the tea are regularly turned and moistened to allow the microbial action to develop. Bacteria, moulds and yeasts develop in the humid conditions, fermenting the tea. Once ripened, the tea is given a shot of steam so the leaves can be pressed into the desired shapes. The resulting shou pu’erh tea tastes akin to a modestly aged shen pu’erh tea. It can be stored without deteriorating but it’s unlikely to develop further. 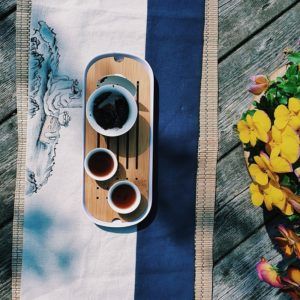 Raw (sheng) pu’erh is generally brews to a pale green liquor with a fresh, bitter-sweet character with notes of dried fruits, osmanthus flowers, and a delicate earthy aroma.

Cooked (shou) pu’erh is often much darker with a ruddy brown liquor and a marvellously rich, sweetish character, with hints of overripe soft fruit, osmanthus flower, honeycomb and a delicate earthy aroma sometimes with hints of tobacco leaf.

When brewing pu’erh in a gaiwan, you’ll find the flavours develop and change with each infusion. Try to notice the differences between each steep and how you feel internally after each cup.

It’s from Xiaguan Tea Factory, Dali, Yunnan Province, China where the leaves are grown at an elevation of 900-1000ft. 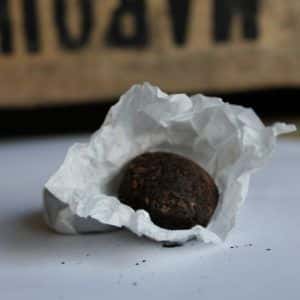 To brew with an infuser in a teacup/mug:

-Place one unwrapped mini tea cake in your infuser as you would do with your loose leaf tea.

-Remove the infusion and enjoy!  But don’t throw away the leaves – this tea can be re-steeped multiple times (up to 5 steepings!).

There is also a practice called ‘washing the leaves’ which is common to perform prior to brewing Pu’erh.  As soon as the kettle has boiled, this involves pouring boiling water over the tea in your mug and then pouring this away after a few seconds. This removes unwanted smaller leaf particles and facilitates further extraction in later steeps.

To brew in a gaiwan:

– Heat your gaiwan and cups with hot water

– Place an unwrapped cake into your gaiwan, then fill your gaiwan with 100°C water

– Refill your gaiwan with boiling water, wait about 20-25 seconds, then pour the tea through a strainer into a jug.

– Be aware of the changing flavour with each steep and trust your instincts. 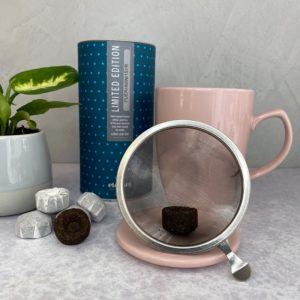 If you’re new to Pu’erh mini tea cakes, fear not – we have everything you need to brew.

A simple way to enjoy it is with an Infuser Mug or an Infuser Teapot like our colourful Eteaket teapots, (or the amazing cast iron Japanese Style teapots).  Other handy tools include the Tea Timer.

To brew it in a more traditional manner, our Traditional Gaiwan Tea Tasting Set allows you to enjoy the full sensory experience.